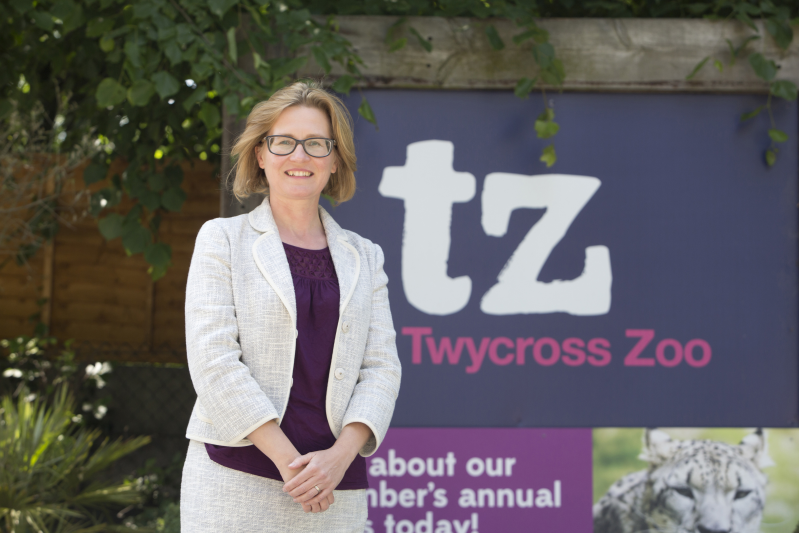 For the second instalment of our Women in Industry interview series we were privileged to be joined by Sharon Redrobe, CEO at Twycross Zoo. Sharon also holds a personal appointment to the UK Government’s advisory body on zoological matters (the Zoos Expert Committee), and is a Secretary of State-nominated Zoo Inspector for England. In addition to this, Sharon serves as Chair of Trustees for Ape Action Africa, a rescue centre for chimpanzees and gorillas in Cameroon.

We spent thirty minutes with Sharon to discuss her experiences progressing through her career right up to her current position as CEO. This series aims to equip women with the knowledge and tools to smash the glass ceiling and pave the way for others to do the same. Our ultimate aim is to inform and encourage businesses to think about the preconceptions and processes they have that may be stifling the progression of diversity in their workplace and boardrooms.

Below you can find the first half of our interview with Sharon, check back soon to continue reading the second half of Sharon’s inspiring interview.

How do you think women/girls could be encouraged to consider careers in male dominated courses?

The key is giving girls and women the tools to crack into the male dominant workplaces. Seeing that there are role models and encouraging women not to worry about being one of only a few females on the course will help to tackle those initial obstacles. However it’s important not to act like a man in order to fit into a male environment. We need to become more resilient in ourselves, and not just by conforming to the male workplace culture. If we back off and simply try to fit in with the environment, we’ll never crack into these career paths.

It is also important to make sure we have our facts right. I trained to be a vet, and the year I qualified was the first with equal gender ratios. Now, females are dominating the industry, yet in many schools, children are being told it is a male dominated profession, so there is a lag in the perception of some industries.

Do you see any difference in the progression of women to men in their careers over the last 10 years in zoos?

I see it everywhere. There is often a 50/50 ratio of male/females in junior roles working with animals. It’s interesting, sometimes there’s less men further up because they’re traditionally the bread winners, and in comparison to other industries they’re not highly paid roles. However, animal keeping roles are typically full time and inflexible, which often means that as soon as women have kids they never come back to that career, so then the senior roles are filled by men by default, as the qualified women are no longer there to promote.

Then there’s the overall conscious and unconscious gender bias in the workplace. When I started here at Twycross Zoo, there were approximately 80% females at the very junior levels, but two tiers up, it quickly switched to all male management. It was really interesting because I’d go to meetings with people at management and sub-management levels and they’d say things like ‘we can’t rota the girls on for that’. I would challenge them and their response would be something like ‘because it involves going up a ladder’ – What! So now we’re saying girls can’t climb ladders? No. They were already ruling women out unnecessarily.

We also have a firearms team at the zoo in case of emergency situations, and it was all male. I can shoot a gun, and I’m 5ft 3, so it is not a strength issue. When questioned on the lack of diversity they would say ‘Girls don’t like shooting guns’. My response is always “Have you asked them?!” And then there is the language in the workplace, saying ‘girls’ rather than referring to staff by name, while male staff were referred to by name. I was quite hot on that a few years ago. People thought I was mad, but I think  it’s important that everyone is referred to by their name. I’d hear things like “Well love, we would like to promote women but they never go for the job.” Of course they don’t! Because all of the language used in the workplace is already saying that they don’t want females on the team.

I am a trailblazer. My personality means that if I see injustice or unfairness, I’ll have a crack at tackling it. But that’s unusual, as most people just want to do a good job and not want to fight, and that’s true for both genders, but men don’t walk into work and constantly hear language that’s excluding them. I have a huge thing, not just about HR policies, but acceptable language in the workplace all the time. You’ll often hear jokes or ‘pet’ names used specifically for women, I have a great sense of humour (I think!) but you cannot allow the joke culture to prevail , because it’s insidious. I think it’s a real problem, but people don’t want to hear about it and think the issue is irrelevant or boring.

Even recently the boss of Saatchi & Saatchi resigned after he argued that women no longer face sexism in the workplace; that simply isn’t the case. It doesn’t matter if you don’t mean it, if you say it, it’s out there. In my talks I talk about my dad; I love my dad! But my dad doesn’t think women should work, I would not employ my dad.

It’s not about hatred, or negativity, or lack of respect: at work that use of language is unacceptable. It needs to be challenged, there’s no excuses, no “but they’re a nice guy so it’s okay”. No actually, if they can’t work with women without taking the mickey, then no.

It might not be everyone, but I think women in particular tend to be bad at managing change and conflict, because our society is still fairly patriarchal and girls are socialised to be peace-keepers and not argue, and when they do, they are described as bossy, where men are called natural leaders. People think it’s a joke, but it’s still so true. We should be bringing up girls not calling them bossy, but knowing it’s okay if they take charge. The workplace will mirror society and we’re still a male dominated society, so it will be a challenge but that’s what legislation is there for.

I was at another talk recently and a woman stood up and said she was the first woman to join a male team. On the first day, there was a bra left on her PC monitor. The men on the team all thought that was hilarious, when actually it’s just really offensive. You’re boxed into a position where you have to laugh otherwise you are accused of not having a sense of humour. Not everyone is horrible, but even if they don’t mean to be horrible, they just think it’s funny. And that’s what we have to break. HR need to be fully integrated into organisations and really get a handle on this….and I know it’s really difficult for HR advising a director who wants to ignore such workplace behaviour.

I think women who have made it, particularly in my and the generations above mine (I’m in my late forties), will tend to say some women make too big a deal of it, “I made it without complaining”. It’s a bit like that saying, “She broke through the glass ceiling, but the shards killed everyone beneath her”. It’s great that you’ve made it, but did you make it by being a bitch, or being more of a man than a man, or by being so super-sensitive that you’ve never promoted a woman because you don’t want to be seen to favour women. How many women have you promoted? Because you should be, why wouldn’t you? Paving the way is not just about doing things for yourself, it’s about what you do to help other women too.

hear people who say don’t rock the boat because there’s not really a problem. There is! If you look at published diversity statistics, that aren’t even about management diversity (though it’s probably reflective), it will take something like 80 years to achieve equality at this rate of change. It’s a joke, that is a ridiculous number.

However I don’t think things will change without legislation. That’s what comes up a lot, a lot of people will say “Quotas are bad”. We’re not telling you to promote incompetent people ….there should be enough decent women in your workforce to promote in the first instance. Are you actually just saying that women are rubbish? There’s no way that quotas shouldn’t work. If you have two equally qualified, good candidates, it does mean the female will get the job, but you know what, make a stand. Is there really anything wrong with that? The reason we have quotas in place is because, until now, the men would have always got the job in this scenario. So we need to follow logic through. Used properly, quotas should never mean someone useless will get the job. That doesn’t help anyone.

It’s difficult, and it’s important not to be ‘male bashing’, but a lot of men don’t even think about it. I do regular talks where it’s often a mostly male audience, and that’s the problem. One week a guy put his hand up to say ‘That’s not our business’. I looked around the room of about 150 people, and asked all the females to stand up. There were about 10. I then asked why there weren’t more women at the Partners Conference. Are you not recruiting females? The response was “They drop out”. So why are they dropping out? “Because they have kids”. Are you sure that’s why they’re dropping out, have you asked? Have you run any confidential surveys? Why aren’t you offering flexible hours?

Can women have it all?

Yes, if you want it. In my last job I had a guy who wanted to work part-time when his kids were born. GREAT! We need to encourage that, we won’t have equality for women, if we don’t give it to men. We need to let them in on the things we currently dominate too, and give them the space to choose child-rearing and going part-time too. That can be difficult.

Parental leave can be shared between either parent now, but I have a friend whose husband asked his work, who are all male, who just said he must be joking. It’s the law, but he knows if he put it in writing, even though they couldn’t give him the sack directly for that, we all know how it works in these companies. So it hasn’t integrated yet, but that will take time.

This is the first half of our interview with Sharon, check back soon to continue reading the second half of Sharon’s inspiring interview.

A huge thanks to Sharon and her colleagues Amy and Kelly for their support and time to arrange the interview, and for the fantastic insights you have offered into your career.

For further resources and interviews, please visit our Women in Industry series homepage. If you have any comments or would be happy to be interviewed for further instalments of this series, please get in touch with us at: womeninindustry@apex-recruitment.co.uk