Apex are expanding internationally after striking a deal with Volvo 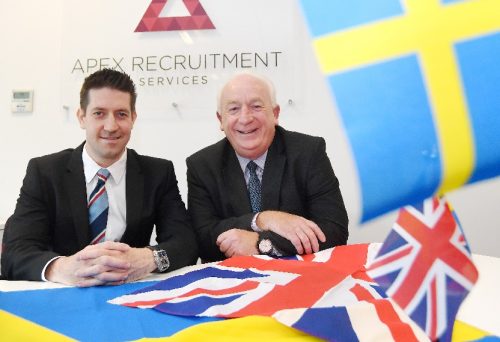 Apex are delighted to announced an international expansion after striking a deal with Volvo Car Corporation.

As a specialist agency in the automotive, engineering and advanced manufacturing sectors, we have been engaged by Volvo – part of the Geely Group which owns LEVC, the makers of the London Taxi – to recruit staff to work at their Swedish operations.

This is a fantastic achievement as we celebrate our 40th anniversary. We have worked with specialist consultants 52 Global, in Coventry, to negotiate the agreement with Volvo and will soon begin recruiting for a range of positions at its production and research & development facilities.

We have also reached agreement to recruit for roles at Geely Group’s subsidiary, CEVT (China European Vehicle Technologies), based in Gothenburg. CEVT was founded in 2013 to provide innovation and engineering services to automotive organisations within the Geely Group.

Richard Marchington, Sales and Marketing Director of Apex, said the strategy was a recognition of the service that they provide in the UK and how this could be replicated in Sweden, supporting the automotive market in both countries allowing continued growth.

“We have been talking with Volvo for around 18 months with the possibility of helping them recruit staff and we have now reached agreement,” he said.

“They have undergone considerable investment in recent times. Their new model ranges have been well received and they enjoyed record sales last year with a rise of seven per cent.

“Their announcement that all new Volvo models from 2019 will enjoy some form of electric propulsion has really upped the ante in the automotive world, and clearly there will be a great deal of work to make that happen.

“They realise that our reach within the industry extends globally and are keen to tap into the skills of the people we work with, as they have a need for a high level of expertise for some of the cutting-edge projects they are undertaking.”

Apex is now planning to open an office in Sweden to service the contract, and is also in talks with other international companies.
Marchington added: “There are several draws for Apex staff to move to Sweden to work. Volvo are undertaking some cutting-edge work across their model range and it is a very interesting environment.

“There is an appeal of working in a new culture and as well as being a beautiful country, they have a very attractive work-life balance with competitive salary levels.

“We are also in advanced talks with another company elsewhere in the world and hope to have positive news of that in the near future.”